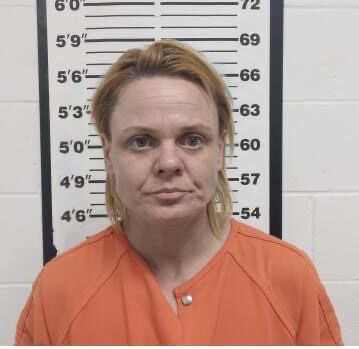 On Wednesday, 18 January at approximately 12:02 a.m. Officer Oglesby was patrolling on U.S. Highway 72 West when he spotted a vehicle travelling with an inoperable tag light and initiated a traffic stop near the Southern Motel for further investigation. Officer Oglesby recognized the driver as Amanda Nicole Eliff-Towery and the passenger as John Wilson and radioed Dispatch to check their status.

Dispatch radioed back that the passenger, John Wilson had an active Felony Warrant as well as a Municipal Court Warrant so Officer Oglesby directed him to exit the vehicle. Mr. Wilson was then placed under arrest and secured in the back seat of the patrol car.

Officer Oglesby then returned to interview the driver and noticed Ms. Towery fidgeting around as if trying to hide something. Ms. Towery was then asked for consent to search her vehicle and she gave consent. Upon searching the vehicle, Officer Oglesby located a wallet under the driver seat containing a glass pipe with methamphetamine residue on it, a plastic cigarette package wrapper containing Methamphetamines and another baggy containing Cocaine. When confronted again about any other narcotics, Ms. Towery pulled a pill bottle from her shirt that contained marijuana.

The felony case will be presented to an Alcorn County Grand Jury and the misdemeanor charges will be handled in Corinth Municipal Court.