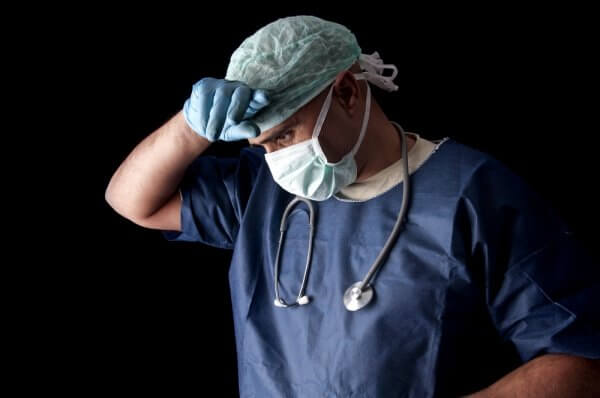 Dr. Jessica Kiss’ twin girls cry most mornings when she goes to work. They’re 9, old enough to know she could catch the coronavirus from her patients and get so sick she could die.

Kiss shares that fear, and worries at least as much about bringing the virus home to her family — especially since she depends on a mask more than a week old to protect her.

“I have four small children. I’m always thinking of them,” said the 37-year-old California family physician, who has one daughter with asthma. “But there really is no choice. I took an oath as a doctor to do the right thing.”

Kiss’ concerns are mirrored by dozens of physician parents from around the nation in an impassioned letter to Congress begging that the remainder of the relevant personal protective equipment be released from the Strategic National Stockpile, a federal cache of medical supplies, for those on the front lines. They join a growing chorus of American health care workers who say they’re battling the virus with far too little armor as shortages force them to reuse personal protective equipment, known as PPE, or rely on homemade substitutes. Sometimes they must even go without protection altogether.

“We are physically bringing home bacteria and viruses,” said Dr. Hala Sabry, an emergency medicine physician outside Los Angeles who founded the Physician Moms Group on Facebook, which has more than 70,000 members. “We need PPE, and we need it now. We actually needed it yesterday.”

The danger is clear. A March 21 editorial in The Lancet said 3,300 health care workers were infected with the COVID-19 virus in China as of early March. At least 22 died by the end of February.

The virus has also stricken health care workers in the United States. On March 14, the American College of Emergency Physicians announced that two members — one in Washington state and another in New Jersey — were in critical condition with COVID-19.

At the private practice outside Los Angeles where Kiss works, three patients have had confirmed cases of COVID-19 since the pandemic began. Tests are pending on 10 others, she said, and they suspect at least 50 more potential cases based on symptoms.

Ideally, Kiss said, she’d use a fresh, tight-fitting N95 respirator mask each time she examined a patient. But she has had just one mask since March 16, when she got a box of five for her practice from a physician friend. Someone left a box of them on the friend’s porch, she said.

When she encounters a patient with symptoms resembling COVID-19, Kiss said, she wears a face shield over her mask, wiping it down with medical-grade wipes between treating patients.

As soon as she gets home from work, she said, she jumps straight into the shower and then launders her scrubs. She knows it could be devastating if she infects her family, even though children generally experience milder symptoms than adults. According to the Centers for Disease Control and Prevention, her daughter’s asthma may put the girl at greater risk of a severe form of the disease.

Dr. Niran Al-Agba of Bremerton, Washington, said she worries “every single day” about bringing the COVID-19 virus home to her family.

Al-Agba said she first realized she’d need N95 masks and gowns after hearing about a COVID-19 death about 30 miles away in Kirkland last month. She asked her distributor to order them, but they were sold out. In early March, she found one N95 mask among painting gear in a storage facility. She figured she could reuse the mask if she sprayed it down with a little isopropyl alcohol and also protected herself with gloves, goggles and a jacket instead of a gown. So that’s what she did, visiting symptomatic patients in their cars to reduce the risk of spreading the virus in her office and the need for more protective equipment for other staffers.

Recently, she began getting donations of such equipment. Someone left two boxes of N95s on her doorstep. Three retired dentists dropped off supplies. Patients brought her dozens of homemade masks. Al-Agba plans to make these supplies last, so she’s continuing to examine patients in cars.

In the March 19 letter to Congress, about 50 other physicians described similar experiences and fears for their families, with their names excluded to protect them from possible retaliation from employers. Several described having few or no masks or gowns. Two said their health centers stopped testing for COVID-19 because there is not enough protective gear to keep workers safe. One described buying N95 masks from the Home Depot to distribute to colleagues; another spoke of buying safety glasses from a local construction site.

“Healthcare workers around the country continue to risk exposure — some requiring quarantine and others falling ill,” said the letter. “With emergency rooms and hospitals running at and even over capacity, and as the crisis expands, so does the risk to our healthcare workers. And with a shortage of PPE, that risk is even greater.”

Besides asking the government to release the entire stockpile of masks and other protective equipment — some of which has already been sent to states — the doctors requested it be replenished with newly manufactured equipment that is steered to health care workers before retail stores.

They called on the U.S. Government Accountability Office to investigate the distribution of stockpile supplies and recommended ways to ensure they are distributed as efficiently as possible. They said the current system, which requires requests from local, state and territorial authorities, “may create delays that could cause significant harm to the health and welfare of the general public.”

At this point, Sabry said, the federal government should not be keeping any part of the stockpile for a rainy day.

“It’s pouring in the United States right now,” she said. “What are they waiting for? How bad does it have to get?”

Kaiser Health News (KHN) is a national health policy news service. It is an editorially independent program of the Henry J. Kaiser Family Foundation which is not affiliated with Kaiser Permanente.