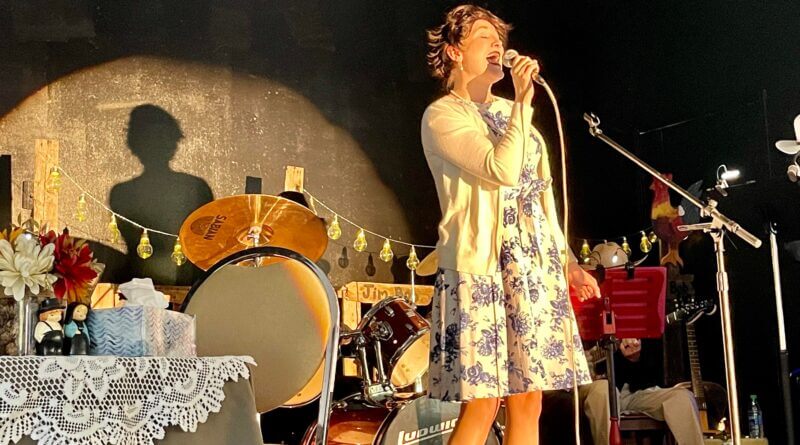 Based on the true story of friendship between Jackson, MS, native Louise Seger and the incomparable Patsy Cline, the show by Ted Swindley has been celebrated nation-wide…and comes to our area this week, June 23-25.

The show adds dramatic performances to the already large and growing list of community events offered by the Jacinto Foundation.

“This is a first for Jacinto,” explains Charlette Foster, Director of Jacinto, “I think it will attract all ages of folks and is family-friendly. Also, the music will be awesome!”

At the heart of the play is the music, and this makes the drama a natural fit for the Jacinto grounds.

“We have ‘Pickin’ At Jacinto’ every third Saturday night, where we invite local bluegrass bands to come play. This production goes right along with all the music we have been bringing to Jacinto since February,” explains Foster.

For Kayla Frazier Myers, who stars as Cline, the joy is in the musicians she is able to work with:

“I am extremely honored to be doing this show with such talented and experienced musicians. It’s a beautiful portrayal of Patsy Cline’s life and lasting influence in country music and I know the audience will enjoy hearing all of their favorite songs.”

One of those musicians is Barney Davis, the show’s bass player, who adds, “What I enjoy about the show is the music and reviving that for the audience.  Patsy’s music is truly ageless and I will enjoy the looks on everyone’s face when they hear these songs and the memories they associate with them.”

It was the love of Patsy that attracted local actress Jenny Jordan to the show:

“I’ve been singing Patsy Cline songs since I was six years old,” says Jordan, who plays Louise Seger opposite Kayla Frazier Meyers’ Patsy Cline, “So, to be a part of this show is a dream come true.”

The show’s director Amy Marsh is excited to be at the helm of a project that offers something for everyone:

“Comedy, drama, and of course all of Patsy’s hits make for an exciting night of family friendly entertainment.”

The play comes about as a cooperative effort between the Tishomingo Arts Council, The Jacinto Foundation, and Ripley Arts Council.“Jacinto has such a beautiful campus,” explains Brent Bonds, Chair of TAC and producer of the show,”It’s a great place to be able to put on shows of all kinds, indoors or out. We were grateful to be able to initiate the partnership in putting this event on with Jacinto and Ripley. This is a great show and it fits what Jacinto is doing; and Jacinto – being the old center of Tishomingo County before it was broken up into Tishomingo, Alcorn, and Prentiss – is a really cool place for groups to come together. We push for building community across communities, so this collaboration, set here, is really an awesome thing we hope to see more of.”

The collaborative effort stands to be the first of many, based on the interest the show has already received. According to Bonds, tickets have been selling quickly. “Seats began to fill the day we first promoted the event, and we are expecting sell-out crowds. While there may be tickets available at the door, we urge folks to get seats in advance so they don’t miss out. Thursday’s performance in particular has been in demand, and we’re expecting a heavy attendance Saturday when we’ll be offering a cookout prior to the show. This is a show you’re going to want to see, and if you want to see it, it’d be best to get those tickets now.”

Sponsored by Nicholas R. Bain, Attorney; Kudzu 104.9; Hearn Law Firm; The Purple Helmet Initiative; and RCTV 19, “Always… Patsy Cline” will run 7 pm nightly, June 23-25 at Jacinto Courthouse in Rienzi. Tickets are currently on sale for $15 and are available in-person at The Jacinto Courthouse or at Renasant Bank in Iuka, MS. Tickets may be acquired online by emailing Tishomingo Arts Council at tishcoarts@gmail.com.

A special pre-show cookout will be held Saturday, June 25th, at 6 pm. Play-goers are invited to show up early on Saturday to enjoy hamburgers, hotdogs, and more for $7 a plate before the show begins.