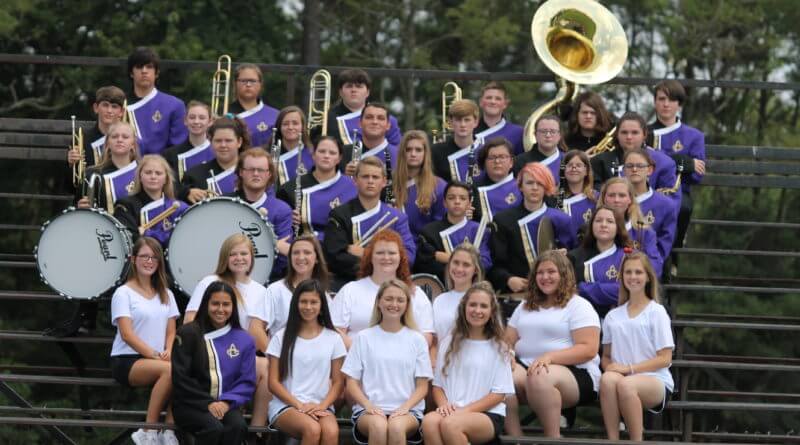 Marching to Their Own Beat By John Mask

Sit and think about the sounds you hear on a Friday night at any local high school. Some of you heard a whistle blowing, some of you heard yelling and hollering, maybe you heard Down-Set-Hut. Although those are all very common sounds, that’s not what I heard. I heard the angelic melodies and perfect harmonies hidden in the school fight song, nestled into the touchdown tune, and showcased in the halftime show. That’s right. I heard the band when I thought about a Friday night. Specifically, I heard the Purple Pride Marching Band.

I recently had the opportunity to sit down and chat with a few members of Alcorn Central’s band. The conversations were nothing short of amazing. There was a specific energy in that room that just can’t be described.

I sat down with Tritney Crum – Alto Saxophone, CJ McLemore – Trumpet, Savannah Young – Dance, Bradley McCalister – Percussion, Tatum Lancaster – Mallets, Mia Mallard – Drum Major, and Zoe Henderson – Color Guard. Each member represented a different section of the band. Each with a unique talent and ability, but all with the same passion and desire.

The one thing that really stood out to me while talking to these young, talented people was their sense of pride and their feeling of unity. When asked what the biggest goal was for this year, collectively they said championships and relationships. I thought it was common to hear that a group of competitors wanted to win a championship, but when I heard a group of high schoolers say they wanted to achieve good relationships, it shocked me.

After speaking to Ms. Betty Patterson, the ACHS Band Director, their previous answer didn’t shock me in the slightest because Ms. Patterson has a desire to watch her students grow: not on the field but in life. She told me that through band, she wants her students to leave with a mindset focused on accomplishing anything they set out to do. She wants her students to understand important life skills like punctuality and pride in their appearance. To me, it was obvious that Ms. Patterson has a love for her students and a love for her job, and it shows in the members of the band.

We didn’t just focus on the material things about band like the competitions, routines, or music. Our conversation was much more. It opened up a brand new way of thinking for me and hopefully you. Tatum told me that after they lost the group of seniors from last year that every band member had to make some adjustments and pick up new things. As I stood and watched practice, it didn’t look to me like anyone was struggling with anything, new task or not.

The unity continued throughout the conversation. I asked, “In one word, describe the band at Alcorn Central.’’ The answers, although different, were the same. One said that it was her safeplace, another mentioned that it felt like family, one loved how much pride he felt as a member, and simply put they said that the Purple Pride was “Home.” You know they say, ‘Home is where the heart is.” Well, I have no doubt that the heart that runs the Alcorn Central Purple Pride Band is full of energy, full of pridefulness for each other, and obviously, full of love.

Ms. Patterson and the Purple Pride follow a simple code:
“If we practice and perform with Purpose, Respect, Integrity, and Discipline then we will achieve Excellence. If we do this every day, then we will be Superior.”

I think that every Purple Pride band member will agree with Bradley. He said the most rewarding part about his experiences through band comes after everyone hits that very last note and the crowd cheers and goes wild. He said, “Then, I now that all the hard work was worth it.”

They were nice enough to give me a little treat, so I got to hear their opening number. I, by no surprise, was extremely pleased. Of course, after talking with them and resonating with their story, I didn’t expect anything but greatness. I feel that this year will for sure be The Greatest Show.