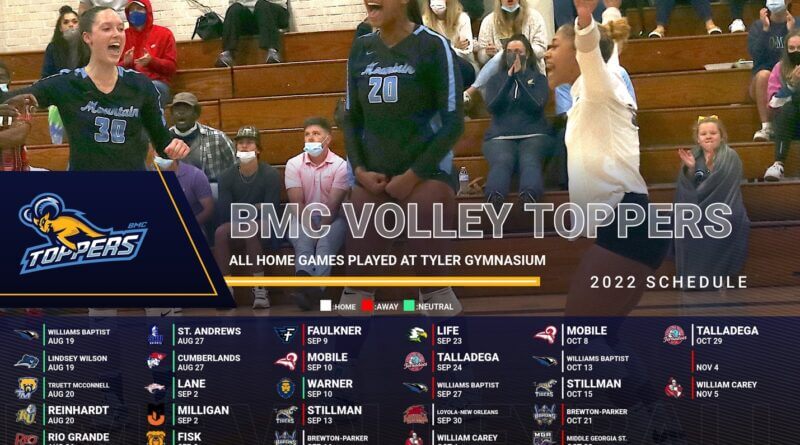 BMC head coach Reid Gann and his Volley Toppers put together one of the strongest seasons in the nation last year rattling off 14 straight wins at one point, winning the SSAC Championship and earning a berth in the national championship tournament.

“Last season created a lot of excitement and momentum for our program,” Gann said.  It also set a new bar of expectations.”

BMC will return super senior and SSAC All-Conference hitter Taylor Wright (SR/Huntsville, Ala.) on the outside net.  Wright spiked 420 kills last season, hitting at a .209 clip while knocking down 28 aces and blocking 59 balls total.

Despite losing All-Conference pick and 2021 Barnes & Noble College Scholar-Athlete of the Year for the SSAC Julianna Taylor, the Volley Toppers return another All-Conference star, Jaiyah Jackson (SO/Alexander, Ark.).  Jackson put together an astounding freshman year, tallying 611 digs at 4.43 per set along with 47 aces.

“I’m really look forward to getting the season under way,” Gann said.  “We are bringing in a lot of talented and experienced players.  I’m depending on our veterans to fulfill leadership roles to go along with our strong recruiting class.  We’re excited to see what the next few months will hold.”

The Volley Toppers begin their defense of the SSAC crown September 10 against Mobile on the road to open conference play.